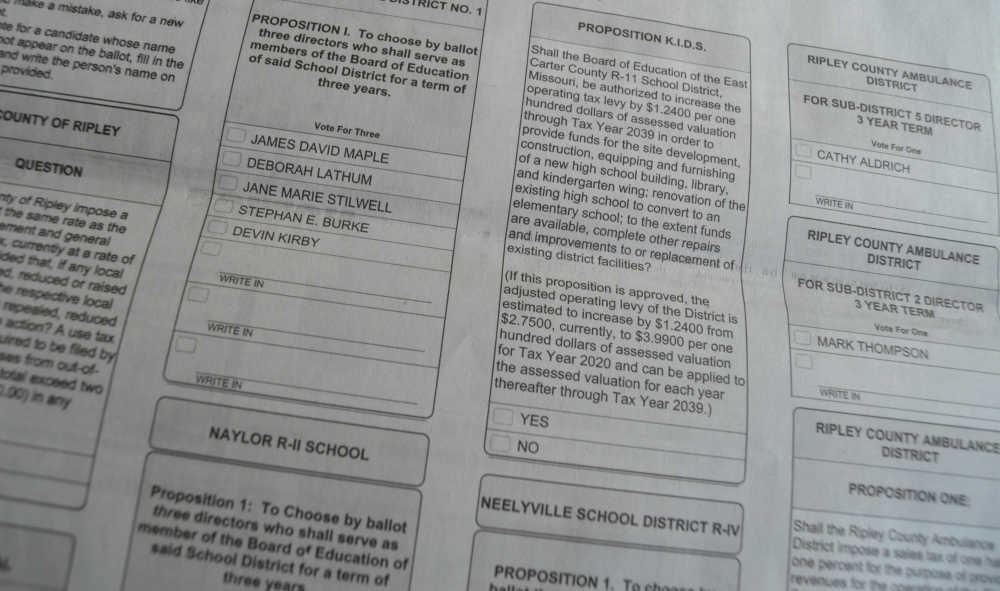 Three sales tax issues and two contested school board races will be on the ballot Tuesday, June 2, as Ripley County voters go to the polls for the first time since the start of the COVID-19 pandemic.

Gov. Mike Parson postponed the election on April 4 while the state was in the midst of a quarantine to combat the spread of the virus.

County clerk Becky York encourages those going to the polls to be patient and respectful of others as several precautions will be in place to protect poll workers and voters.

The county clerk’s office received a $20,000 grant to purchase materials needed to make polling places safer. Secretary of state Jay Ashcroft also hand delivered masks, sanitizer and other items to several Missouri counties including a stop in Doniphan on May 18.

“We are going to provide a combination of a stylus/pen for the places with poll pads,” York said. “They can sign in with the stylus then click it and it becomes a pen to mark their ballot.”

Voters are asked to leave the stylus/pens in a basket after depositing their ballots in the optical scanners so they can be sanitized and used again in August and November.

A shortage of poll workers has led to the closure of the polling location at the Purman Volunteer Fire Department. Purman voters will cast their ballots at the Doniphan Methodist Church Fellowship Hall.

“While Purman probably offered us the very best physical set up with parking, a dedicated room and easy access, it was selected because of its proximity to the other polling place,” York said. “It was the most logical one to go with because of the distance traveled.”

Elections remain an expensive exercise for smaller counties with the minimum cost of about $15,000 per polling place.

Voters in Ripley County’s largest school district will be asked to fill three expiring three-year terms on the R-I board of education from a field of five candidates.

Current board member Jason Johnson chose not to seek another term.

Four candidates filed for three available positions on the Naylor R-II school board. Terms are for three years.

Those filing at Naylor include Will Spargo, Brian Cannon, Eric Crofford and Ryan Ainley.

No elections were required for the Gatewood R-III and Lone Star R-IV school boards as the number of candidates did not exceed the number of expiring terms.

In the City of Doniphan, both incumbent aldermen are unopposed in their bid for another two-year term. Leslie Netherland filed for a full term in Ward I while Riley March filed for re-election in Ward II.

At Naylor, no election was required for a city with a population below 1,000 as the number of municipal candidates did not exceed the number of expiring terms.

Dale Day was sworn-in during April as the new mayor to replace Bernard Allen, who did not seek another term. Homer Davis and Dustin Hogan each were unopposed for new terms on the board of aldermen.

For the third time in recent years, the Ripley County commission is asking voters to give approval for the county to receive sales tax revenue for items purchased from online businesses such as Amazon.

Under current Missouri law, voters must give approval for the sales tax to be collected locally. City of Doniphan approved and City of Naylor voters already have approved use tax proposals.

The issue has become a complex one in many parts of the state. One thing that is clear, however, is that the rapid growth of online shopping in the wake of the COVID-19 pandemic could cost local governments.

The City of Doniphan reported in February receiving about $5,220 from the state in online sales tax collections. Those amounts jumped to more than $10,500 in March and $14,000 in April and accounted for about one-third of all sales tax receipts for those months.

The one-cent sales tax to support Ripley County Memorial Hospital has not been collected since September 2019 but legally still exists on paper.

A ‘yes’ vote on this ballot question will abolish the tax permanently, a move that is necessary because it was specifically created for Ripley County by an act of the Missouri legislature in 2010.

Meanwhile, sales tax money that was collected following closure of the hospital eventually will be dispersed back to the county through legislation approved this past spring in Jefferson City and still awaiting the governor’s signature.

The Ripley County Ambulance District board of directors is asking voters to approve a one-half cent sales tax that would include a rollback of property taxes currently being collected to finance the district.

The sales tax is expected to generate about $360,000 in revenue each year. In return, the district’s property tax rate of 30 cents per $100 assessed valuation will be rolled back to 50 percent.

A similar proposal was approved several years ago by county voters for the county revenue fund and remains in effect today.

Although patients now are transported longer distances to hospitals in Poplar Bluff and Pocahontas, overall revenue numbers lag because of the significant decrease in the total number of transports.

Under Missouri law, the ambulance district is capped at its present rate of 30 cents per $100 assessed valuation on its property tax rate.

In recent years more than 50 ambulance districts have switched from a property tax to a sales tax as a source of revenue.