1948: The Bookmobile Comes To Ripley County 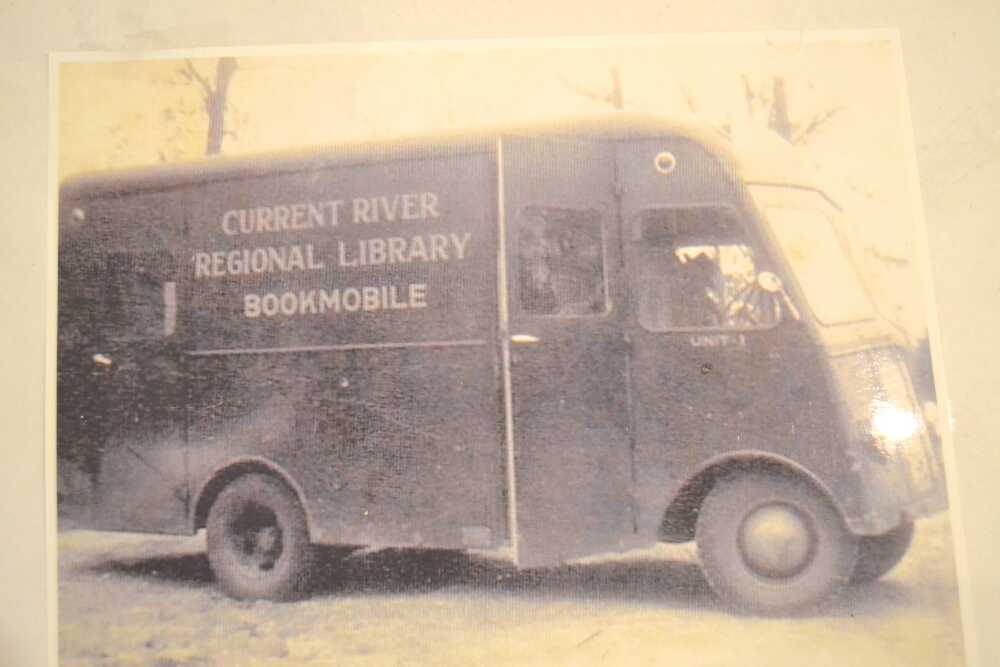 If you attended school in Ripley County between 1948 and the early 1970s you may recall the big blue ‘bookmobile’ (pictured above) from the Current River Regional Library. The bookmobile was a library on wheels that traveled across the region. Students lined up to walk inside and check out a new book. For most of its years of service the driver was Mr. Clint Hawthorne of Doniphan. Shortly after World War II, the Missouri State Library began sending bookmobiles into rural areas to spur interest in taxpayer-funded libraries. Doniphan was well ahead of most rural communities having opened its own public library in November 1934. Voters approved a one mill tax in April 1935 and the Ripley County Memorial Library soon was born. In 1948 the name was changed to the Doniphan Public Library while the Current River Regional Library was organized to serve rural areas of Ripley and Carter counties. With backing from the Missouri State Library, on Sept. 1, 1948, the regional bookmobile was launched with Miss Mary Ellen Stockard of Jefferson City moving to Doniphan to serve as its librarian. Many one- and two-room schools still were in operation and welcomed the library on wheels. Even after school consolidation in the early 1960s, the bookmobile served Doniphan R-I, which didn’t have a modern elementary/junior high library until the late 1960s. In April 1963, the Current River Regional Library opened a branch on Lafayette Street near the present-day sheriff’s office. It later became the Ripley County Library then merged in 1991 with the Doniphan Public Library to become the present Doniphan-Ripley County Library District with a branch at Naylor. While it’s been many years since a bookmobile traveled the highways and rural roads in Ripley County, around a dozen bookmobiles remain in operation today in Missouri. Most primarily serve urban areas.