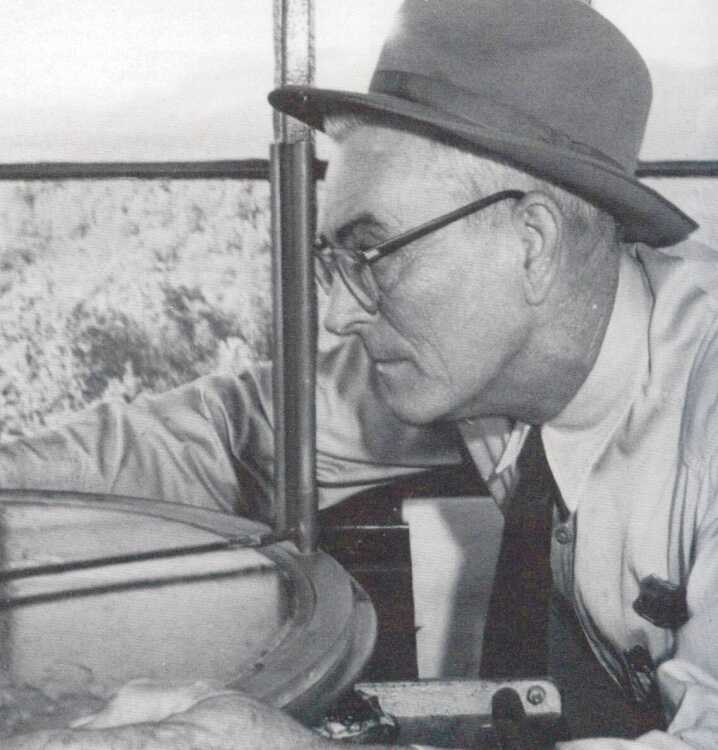 Oades White is pictured in the Briar Lookout Tower shortly before his retirement on Nov. 1, 1962, after more than 25 years as a towerman with the U.S. Forest Service in Carter and Ripley counties. “The first tower I climbed was nothing more than a pine tree with the top cut out of it, a little box built up on top, and a set of wooden rungs up to the top. The box was open, and we stood or sat there, and the top of that ole tree came up through a hole in the floor, and was cut off about shoulder high,” White recalled. Despite its crude appearance, the pre-World War II towers included a mounted instrument known as an alidade, which the towerman looked through to get a degree reading off the instrument. “This reading when correlated with a reading from another tree tower would pin-point the smoke so that it could be checked out, and fire crews would be sent if needed.” The next step in the development of the fire tower occurred during wartime. Pine trees about 60 feet in length were cut and moved to a high point in the area. Standing with the help of guide wires, a box for the towerman was attached to the top. “There wasn’t much improvement in comfort but in those days, we didn’t worry too much about those things since we didn’t know what a heated tower was like,” White said. After the war, the first steel towers were constructed for the forest service. They were sturdy with a little house on top with glass windows and a roof. Before and during wartime, fires were reported by telephone with each towerman in charged of maintaining the lines - which often was a challenge in the surrounding terrain. After the war, two-way radios came into use and gradually a dependable system of communication was developed. In the spring of 1936, White went to work for the forest service clearing roads and building fire trails. Shortly after, a fire tower was built at Eastwood. White said not many workers were fond of climbing the towers ‘but it never bothered me.’ In 1939, he received an appointment as a fireguard and with it a pay raise from $2.50 per day to $3. After serving at Eastwood, High Hill and Braswell, in January 1947 he was transferred to Briar, where he remained until retirement. There were many close calls including once when he was knocked unconscious when being struck by lightning while speaking on the tower telephone. Overall White said he enjoyed his career and was proud to serve.
P-N Archives
Respond to this story