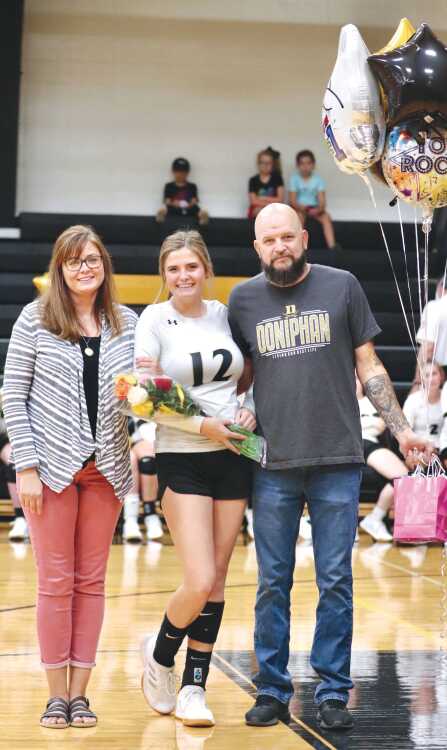 Chloe Jackson has played volleyball all four years of high school and is active with Beta Club, Fellowship of Christian Athletes and FCCLA and was in FTA for two years. She is pictued with her parents, Mindy and Denver Jackson. Chloe plans to attend Three Rivers College to become an occupational therapist assistant.

The Doniphan Donettes volleyball team celebrated Senior Night on Monday, Sept. 28, during matches with the East Prairie Eagles at Bill L. Wright Gymnasium. The junior varsity started the evening by claiming their first win, 25-10, 22-25, 15-9. Before the varsity took the floor, seniors Chloe Jackson and Kennedy Elliott were honored along with their parents. The varsity followed by sweeping the Eagles 25-8, 28-26, 25-3.

Kennedy Elliott has played volleyball all four years at DHS and has also played golf for four years. She has been involved in Beta, Key Club, FCA and FCCLA for four years as well and played basketball during her freshman year. She is pictured with her father, Keith Elliott. Kennedy plans to attend Three Rivers College.
Respond to this story