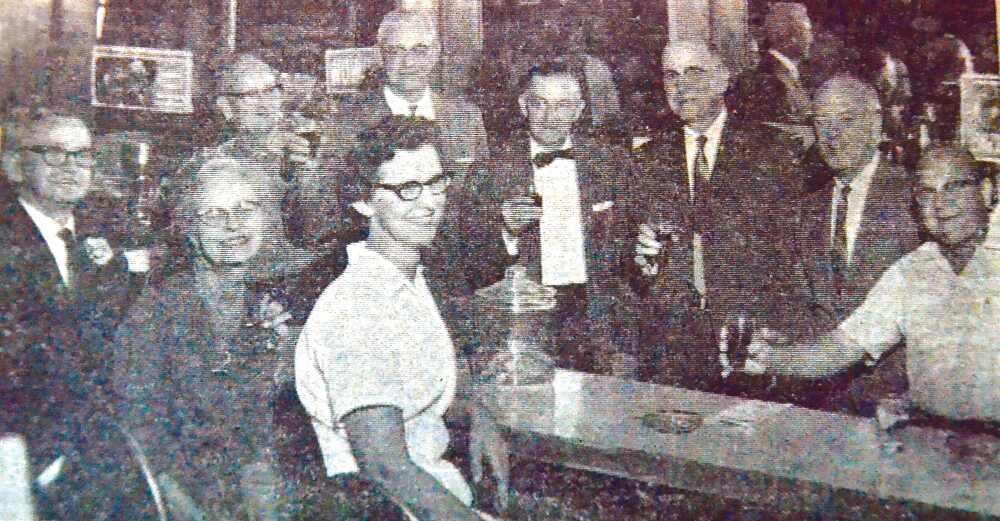 On the weekend of Oct. 9, 1965, Mac and Ruth Finch celebrated the 50th anniversary of Finch’s Drug Store by inviting many of their employees through the years back to town for a reunion. Pictured front from left are proprietors Mac and Ruth along with Rose Randel, who served as manager of the business for many years. In 1915, Mac C. Finch of Birch Tree was gainfully employed in West Plains. Little did he realize that he was soon to become operator of the Annex in Doniphan, an addition built a short time before to Johnston’s Pharmacy. Mac heard the Annex was for sale, looked it over but was not favorably impressed, so he returned to West Plains. Through a strange chain of events, he found himself owner of the ‘Annex’ and in debt for the same. As the years rolled by, Mac found it necessary to expand. Since he could not go out he went up with a balcony in order to meet the demands of his business. In 1937 larger quarters were needed and Finch moved across the street to the present location of Amazing In Home Care on Washington Street. Finch added a large line of pharmaceuticals and the Annex became Finch Drug Store. Mr. Finch passed away in 1972. While the pharmacy was discontinued, Finch’s remained a popular gathering place as a restaurant and coffee shop well into the 1990s. Mrs. Finch passed away in 1993.
P-N Archives
Respond to this story