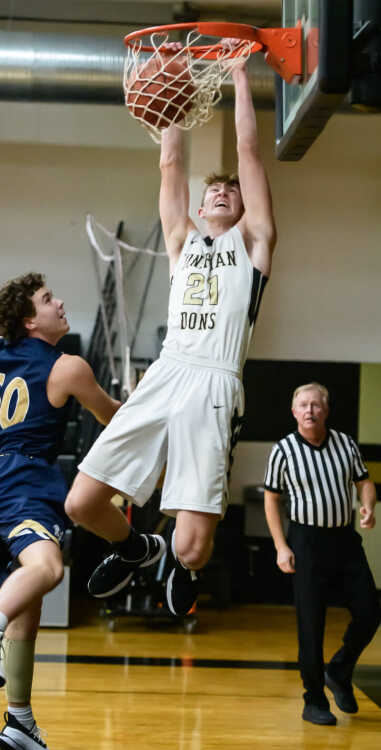 Doniphan senior Orie Owen puts down a dunk during the Dec. 22 game against Saxony Lutheran at Bill L. Wright Gymnasium. At the mid-point of the season, the Dons have won five of their last six games including a rare win Tuesday at Charleston in double overtime.
Steve Inman

The Doniphan Dons’ double overtime win Tuesday at Charleston not only was a potentially huge momentum builder for this season but one for the history books as well.

The win was the first by the Dons over the Blue Jays since 2006, only the fourth win in the past 50 years against Charleston and the first-ever for a DHS team on the Blue Jays' home floor. 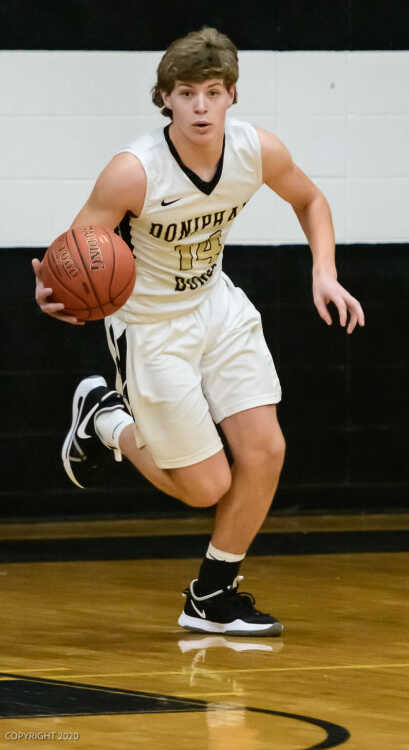 “That was one of the best games I’ve ever been a part of,” said Dons coach Daniel Cagle. “Our kids played about as hard as I have ever seen kids play. They were confident going over there and told me they were going to do it.”

“We’ve now won five of our last six games with good wins over Portageville and Bernie,” Cagle said. “Charleston is one of the top 5 teams in Southeast Missouri and they are really athletic with a great player in Rico Coleman, a sophomore.”

Coleman scored 28 points to lead the Blue Jays on Tuesday.

“We got out-manned. They wanted it more, and it showed,” said first-year Charleston coach Jamarcus Williams.

Charleston saw a chance for victory slip out of its hands at the end of regulation play. Up by one, the Jays went to the free throw line with just seconds remaining after the Dons were called for an intentional foul, giving the Jays two shots plus possession.

Evontrez Hill made one of two free throw attempts to push the lead to 56-54. Dons Nolan Czerwonka and Levi Rawlings forced a turnover on the inbounds play, resulting in a long pass to Orie Owen for the game-tying basket with two seconds on the clock.

In the second OT, the Dons held a two-point lead but missed a pair of free throws with 11 seconds to play. Coleman followed with a basket for the Jays to send the game into a second OT period.

Orie Owen picked up his fifth foul early in the second OT but the Dons continued to stay in the game even without their big man.

Tristian Bryant broke a 73-73 tie with a free throw with 29 seconds left. Bryant missed the second the Dons retained possession when the Jays knocked the ball out of bounds.

Alex Harris’ only bucket of the night was a big one with 11 seconds to play, giving the Dons a 76-73 lead.

Charleston had one final possession but failed to get away a 3-point shot, instead opting for a drive to the basket for two points just ahead of the buzzer, leaving the Dons with a 76-75 edge.

Rounding out the scoring for the Dons was Bryant with nine, Rawlings six, Harris two and Brandon Moore one.

The Dons return to Ozark Foothills Conference action on Friday against Twin Rivers. The junior varsity game is set for a 6 p.m. tip.

Twin Rivers (6-4) is coming off a big victory of its own on Tuesday, defeating Kelly on the road, 51-47. Kelly was coming off a win over Jackson.

“We’re 1-1 in the conference but I feel like we could win out (in the OFC.) Of course, Twin Rivers always is pretty good and they are coming off a good win at Kelly,” said Cagle.

The Dons also are scheduled to play at home Tuesday, Jan. 12, against Mountain View-Liberty.

Doniphan's last win over Charleston was on Feb. 21, 2006, at the DHS gym. The fact Doniphan won the game on its way to a 25-4 season wasn't nearly as surprising as how the Dons did it. The Blue Jays managed to score just 10 points in the second half and for possibly the first time in school history fell victim to the mercy clock rule as the Dons ran away with a 68-34 victory. Matt Rogers, the Dons' 6-11 senior post, scored 17 points, grabbed 12 rebounds and blocked 11 shots. A few weeks later, the two teams met again in the Class 3 sectional round of state tournament play at Poplar Bluff. Charleston won the rematch 59-42.