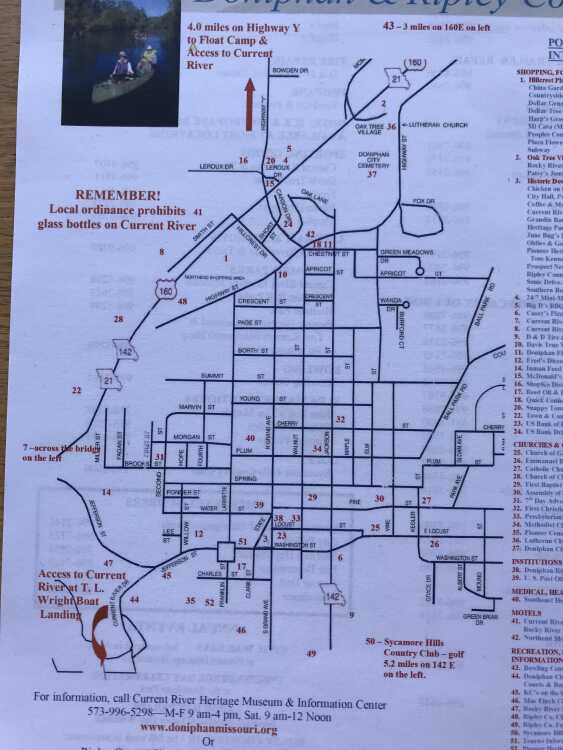 During its meeting on Tuesday, Jan. 4, the Doniphan City Council discussed adding a one-way street that could potentially boost downtown business.

The Doniphan Neighborhood Assistance Program (DNAP) is proposing the construction of a street from the boat ramp area to Franklin Street in the vicinity of the Pioneer Heritage Homestead.

Before Ozark Foothills Regional Planning Commission moves forward with the grant application process, which would involve some city cash matching of 20-30 percent, Smith and Company engineers will do a cost estimate and investigate the options on placement.

The council thinks it could run parallel to the sidewalk that goes from KC’s campground by the pickleball courts to the Heritage Homestead. The council approved moving forward with the preliminary study to be paid for with funds from capital improvements.

Another item of business was the possible refinancing of the city’s municipal water/sewer bond. George Hart of McLiney and Company, a division of Samco Capital, outlined the possible savings to the city if the council agreed to refinance the $386,000 remaining on their current bond which is financed until 2030 at 6.3-6.5 percent interest.

Hart could offer refinancing with the same end date at a rate of 1.5-2 percent interest if the city decided to switch immediately. Hart said it was a smart time to refinance. Savings would amount to about $41,000 for the remaining life of the bond. If the underwriting process was unsuccessful for whatever reason or if the council changed its mind, there would be no fees charged.

City clerk Connie Teslow asked if the potential savings would offset the interest subsidy the city receives. Hart indicated that would be investigated. If not, the city would not be obligated to move forward. The council members present - Riley  March, Leslie Netherland and Steve Collins opted to proceed with refinancing. A call notice would be given for the existing bond.

City attorney Chris Miller asked if the city would then be “out in the cold” if there were issues that prevented refinancing. Hart explained that the call notice is just an intent so there would be no issues if the refinancing didn’t move forward.

The minutes of the meeting held Dec. 14, 2021, indicated Mayor Dennis Cox had requested a $200 increase to his $200 monthly expense account since a salary increase for his position had not been discussed. The topic was tabled so Cox brought it up during old business. The council approved a $100 increase and asked the mayor to monitor expenses closely. They will review it again in six months. Cox agreed to that.

The city received $60,000 earmarked for the park program from the estate of Paul Ripley. It was deposited in general revenue for restricted use.

The council would like to move forward with renovation of the basement of city hall, though it could not be used until an elevator is installed. Rather than have the shaft constructed by one company and the elevator added by another, the council would like to find one company that could do it all. Until then, they will work on redoing the kitchen and bathroom in the council chamber area.

The part on order that was causing the delay in the installation of the generator has come in. Now the issue is getting the contractor back to install it. He is currently involved in another project.

All the lights in city hall will be converted to LED fixtures.

Police Chief Mark Rodgers received permission to hire a police officer with  two years experience. The new officer comes from Oregon County and has done jail work and has been a road officer. Starting pay is $13.50 per hour.

Rodgers noted that three of his employees had difficulty getting medication prescriptions filled under the city’s new insurance plan with HIC. Teslow said it is a temporary disruption while Southern Script completes its database. Employees will receive reimbursement for those out-of-pocket expenses once that is finished.

It was noted that transitions to a new insurance company are seldom smooth. The issues have been only with prescriptions. Temporary medical cards have been distributed.

There were several complaints about the Kinetic phone system in city hall. Employees are inconvenienced by not having cordless phones or headsets. There are issues with the transferring of calls.

The company indicated it has a contract with the city, but city officials noted there are no signatures on it. “Supposedly we’ve got the issues fixed. It goes haywire over time,” said Teslow. The city offices have fiber optics but the police department does not. The city may consider switching to another company.

In the code enforcement report, four violations were forwarded to the city attorney, four notices were given for trash with action pending and two fines totaling $150 were issued for weeds violations. Three new building permits were given.

Among the police department’s 1,838 contacts were 79 tickets, 157 warnings, 7 accidents, 10 arrests and 96 criminal investigations.

The council has bi-monthly meetings at 6 p.m. on the first Tuesday and at 9 a.m. on the third Tuesday unless otherwise posted.