Dons Will Host 7-on-7 Thursday 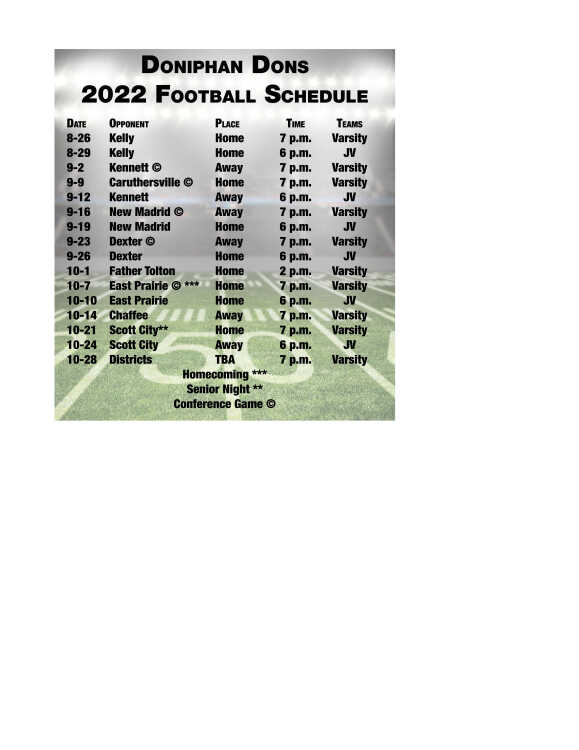 The Doniphan football program will be hosting a 7-on-7 tournament on Thursday as a final tune-up before the 2022 season. The tournament will wrap up a summer of camps and other 7-on-7 competitions as the Dons are entering their fifth year of varsity football.

The tournament will have a pool play followed by single elimination.

Doniphan’s 7-on-7 follows a couple of camps for the Dons, one that they hosted last week and another camp in Corning, Ark., on Wednesday.

“We’ve had pad camps in Thayer and at our place,” Lance said. “We’ll have one more before the 7-on-7 and we’ll take a week off before the real work starts on August 8.”

This year will be Doniphan’s third year playing in 7-on-7 tournaments.

“We played in Best of the East in Arkansas a couple of years ago,” Lance said. “Then we played over in Poplar Bluff last year and we decided that it was time that we hosted one this year.”

Lance said that he’s expecting the team’s numbers to grow a little bit once school starts up.

“We’ve had about 35 kids come out for the summer,” Lance said. “I hope we can get at least 10 more once practices start up in August so we can have about 45 when the season starts. We’ve been lifting weights and conditioning and working on the field a little bit during the summer.”

The 7-on-7 event will start at 9 a.m. Thursday and will be at the Brumitt football stadium.