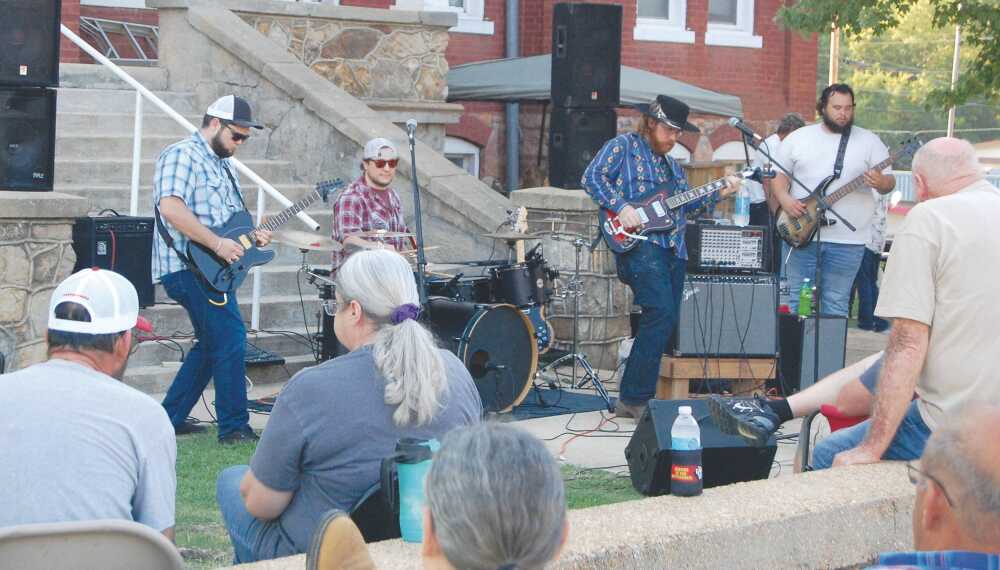 Country and bluegrass music artists and friends will all come together Sept. 23-24 for back-to-back performances on the Ripley County Courthouse stage.

Pickin’ at the Square Fall Super Jam will take place from 2 to 10 p.m.

Kicking off the afternoon and evening of live music will be local talent, the Aaron Donnell Band.

The band is made up of four Doniphan boys who grew up together. “We all love music and have played since we were young,” says Donnell.

The band inevitably evolved about three years ago, each drawn in like a moth to a flame, by his love of music.

The foursome wound up practicing in Donnell’s garage and had their first appearance at a Cruisin’ in the Park concert.

From those beginnings they have become a busy traveling band which performs across the tri-state area of Kentucky, Arkansas and Missouri.

“We all have day jobs, but every weekend we are performing somewhere,” Donnell says. He is employed at Rice Trailer Mfg., in Harviell. Wilson works at Red Oak Charcoal in Ellsinore. Furlong is a teller at Commerce Bank in Cape Girardeau, and White is employed at Peco Foods in Pocahontas, Ark.

Donnell says the band is not motivated by a desire to be famous; however, they would love to take their country-rock sound further.

“Our goal is to turn this into a full-time occupation,” admits Donnell.

That’s not beyond the realm of possibilities. The band released a demo CD about a year ago of songs written by Donnell. Recently they recorded a single entitled, “Memories.” Donnell says, “The whole band played a part in writing this one.”

Their music can be heard on Youtube, I-Tunes and Spotify, or about any streaming app.

Rick Yates, who weekly coordinates the open-air concerts, says “We have several bands and individual singers listed to come, and others are still pending.”

Yates says, “We don’t really know how long the music will last. We will go as late as people are willing to hang around.”

He said last year’s Jam was planned as part of the Heritage Day activities.

“We aren’t really a part of Heritage Days, but we are an extension. Things are usually winding down about that time of the afternoon. It seemed like a good time for us to get started, while we already have a crowd,” he says.

He said the Pickin’ at the Square concerts will last as long as weather permits.