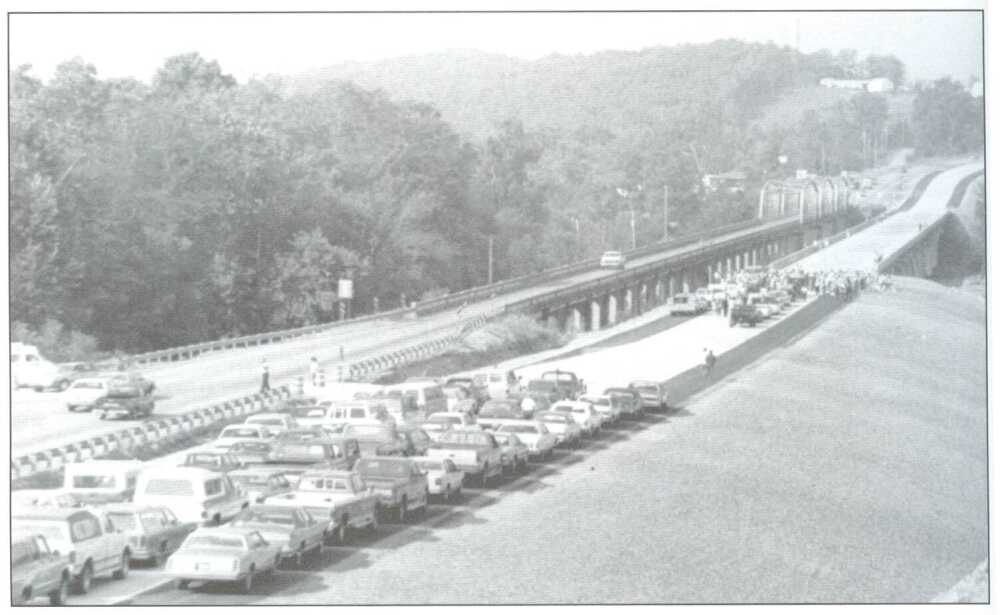 “I want to say farewell to the old and God bless the new. May God bless everyone who comes over this bridge today and tomorrow.” It was mid-morning Friday, Aug. 16, 1991, when 88-year-old Dorothy Burford delivered those words in front of about 300 people and officially opened the new Current River bridge at Doniphan. Dignitaries including Missouri secretary of state Roy Blunt joined local residents for the historic occasion. Work had begun in December 1989 on the $3.5 million project that included about one mile of highway construction. Although not part of the original design, an additional $163,000 was spent to reinforce the structure for earthquake safety. Burford was delightful in her role as featured speaker having many memories to share of all three bridges that have spanned the river. Bridge I (1898-1927) included a wedding at the midpoint between a girl from the west, Nora Klenn, and a boy from the east, Wilbur Wylie. Then there was a 14-year-old swimmer named Helene Burford (later Burcham) ‘who on a dare or maybe it was just her own daring’ dove from the wooden-floored bridge into the popular swimming hole below. “I spoke to her this morning and she advises against anyone doing that,” Burford said, bringing smiles. Bridge II (1927-1991) will be remembered for the day in 1947 when the ashes of former U.S. Sen. Harry Hawes from St. Louis were cast into the river from the bridge. “He loved Doniphan and the Current River and that was his request,” Burford said. After the ceremonial ribbon was cut, a parade of cars representing each decade since the second bridge had opened earned the honor of being the first to cross the new one. In the lead was a 1929 Model A touring car driven by its owner, businessman Wilbur L. Smith. His passengers included Mrs. Burford, Check Braschler (a lifetime resident of Pratt on the west side of the river), and Prospect-News editor Dorothy Ponder, who brought along her five-years-old granddaughter Ashley Johnson.
P-N Archives
Respond to this story