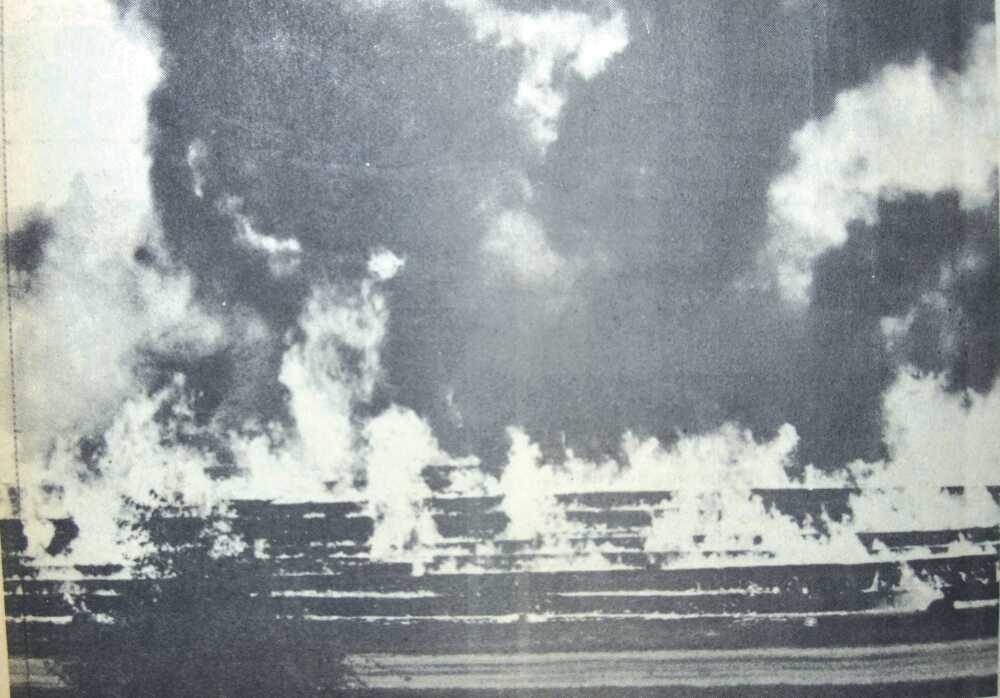 Around 3:50 a.m. Sunday, the 100 or so residents of Oxly were shaken from their sleep by two thundering explosions. One witness described seeing a pickup speeding from the area just ahead of the second blast. Within minutes, 1,071 treated utility poles, some up to 120 feet long and weighing 10,000 pounds, were ablaze in a field located between the railroad tracks and Logan Creek. It had taken M & A Electric Cooperative of Poplar Bluff two years to amass the stockpile for a 124-mile power line running from New Madrid to Reynolds County. The Oxly site was chosen because it was near the midpoint of the project. The fir poles were shipped by rail to Oxly from Tacoma, Wash. By 9 a.m., the fire was at its peak. (Seen pictured above) Flames rose an estimated 20 feet into the air as neighbors helped neighbors evacuate four homes in harm’s way near the tracks. A western fire pump provided by the U.S. Forest Service allowed water to be pumped from Logan Creek (about 400 feet away) and was credited for saving the homes and perhaps the entire town. Firefighters from the Butler County Fire Department worked nonstop for 16 hours and credited the nearby creek for saving the town. They were assisted by a fire truck from Doniphan as Ripley County at the time had no county volunteer fire departments. Thankfully winds remained calm. Reba Demos, a widow, voiced her appreciation for neighbors who moved her belongings from her cottage near the tracks and then the following day moved her back when the danger had ended. Total value of the loss was placed at $947,000 but was insured. Ripley County sheriff Lewis Dawes was certain the fire was intentionally set. Three young men from Arkansas were questioned after they were involved in an accident and scuffled with deputies later that morning at Poplar Bluff while driving a truck matching the description of the one seen fleeing Oxly. However, they reportedly passed a polygraph test and were not charged. No evidence can be found in the headlines that anyone ever was arrested in the case. But 45 years later, Oxly’s ‘million-dollar’ fire remains one of the county’s costliest disasters of all time.
P-N Archives
Respond to this story