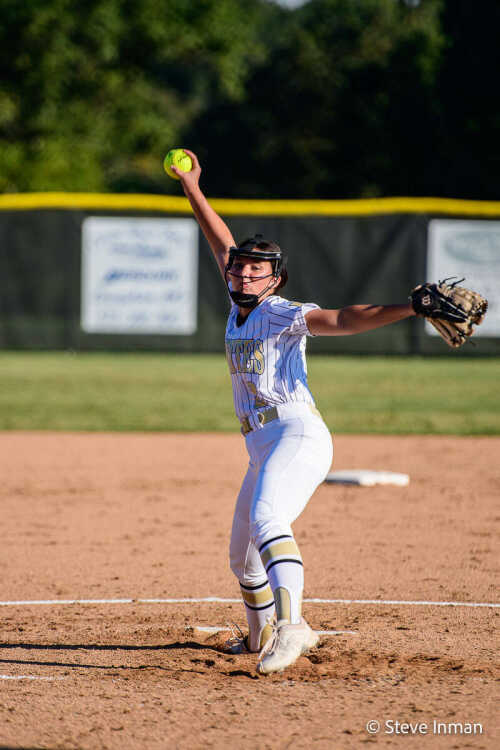 Doniphan's Emilee Davis delivers a pitch during a Sept. 20 game against Twin Rivers at Quick Creek Park. Davis and the Donettes opened Class 3, District 1 tournament play on Tuesday with a 15-0 win over Hancock at the Affton Athletic Association playing fields in St. Louis.
Steve Inman

The good news is the Doniphan Donettes are seeded No. 1 for this week’s Class 3 district tournament. The bad news is the tournament is being played nearly 180 miles from home.

Action started Tuesday at Notre Dame High School in St. Louis with the Donettes playing Hancock High School in the first round. Senior pitcher Emilee Davis allowed just one hit in three innings as the Donettes cruised to a 15-0 opening win. Doniphan, which has won eight games in a row, will face Fredericktown in the semifinals set for 4:30 p.m. Thursday

A win on Thursday would put the Donettes in the championship game to be played at 4 p.m. Friday at the Affton Athletic Association fields at 10300 Gravois Road in south St. Louis.

Perryville will face St. Pius in Thursday’s other semifinal game.

“Our defense has come along pretty strong and it seems like the bats have come with it,” said Doniphan coach Laura Chilton. “Moe (pitcher Emilee Davis) has been doing a heck of a job. It makes it easier for the defense because nobody has been able to hit her.”

Doniphan jumped to a 5-0 lead in the first inning and ended the game on the 15-run mercy rule with one out in the third.

The Donettes ended the regular season on Saturday with a trip to southwest Missouri, where they defeated Reed Springs 15-0 and Aurora 11-0.

On Saturday, Davis went the distance in both wins, including a three-inning no-hitter against Reed Springs in which she struck out five batters. Against Aurora, Davis allowed just one hit in six innings while striking out six.

The Donettes banged out seven hits against Reed Springs including a home run and double from Hawkins, who collected four runs batted in. Bond was 2-for-2 with three runs scored and Bailey Carson added a double.

Hawkins and Carson also homered in the Aurora game. Burton had a pair of doubles while Bond and Davis each had an extra-base hit.

The Donettes avenged their final loss of the regular season on Oct. 7 with a trip to Sikeston. Davis struck out 10 and walked only one while scattering six hits in an 11-2 win over the Lady Bulldogs.

The Donettes had 15 hits including four from Hawkins and three by Carson. Hawkins had two doubles with Carson and Monaghan adding one each. Bond delivered three RBIs and Hawkins had two.

On Oct. 5, the Donettes traveled to Naylor and earned a 9-3 win over the Lady Eagles.

Davis allowed just one earned run in seven innings and struck out seven. The Donettes had 12 hits, led by Burton with three. Bond and Monaghan had two RBIs apiece.

The Donettes jumped to a 7-0 lead with six runs in the second inning.

Whitney Mitchell had three hits for the Lady Eagles, who dropped to 12-11 for the fall season.

Should they capture the district tournament, the Donettes would be scheduled to start state tournament play Oct. 20 against the District 2 champion at a location to be determined.