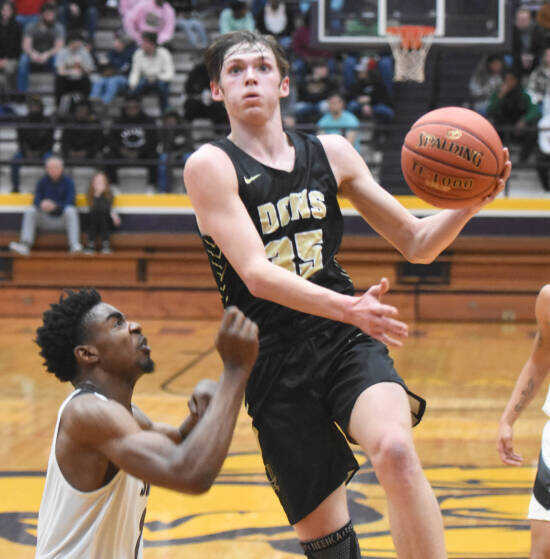 Doniphan junior Max Owen drives to the basket against South Pemiscot during Tuesday night's quarterfinal game at the Bloomfield Christmas Tournament. Owen scored 15 of his 18 points in the second half to help the fifth-seeded Dons to a 63-57 win over the fourth-seeded Bulldogs.
Kyle Smith

With Doniphan’s double-digit lead down to three points in the final minute, Doniphan’s Ethan Jones closed the door on South Pemiscot’s late rally.

Jones was perfect in two trips to the foul line and came up with a steal for a layup to lift the Dons to a 63-57 win in the quarterfinals of the 65th Annual Bloomfield Christmas Tournament on Tuesday in Bloomfield.

Doniphan will face top-seeded Bernie in the semifinals at 7 p.m. Wednesday.

“We kept putting them on the free-throw line in the last (90 seconds). Definitely not great down the stretch, but I thought we played great up until then,” Doniphan coach Daniel Cagle said. “Somehow, the ball kept ending up in Nolan Czerwonka’s hands. He’s capable, but he wasn’t knocking down free throws. We wanted to get it into Jones’s hands, so we started getting it to Jones right there at the end, and he hit some free throws.”

Jones led all scorers with 21 points. He was 5 for 6 on free throws and scored 11 of Doniphan’s 13 points in the first quarter. His steal and layup late was his only field goal in the second half.

Doniphan (6-5) took a double-digit lead early in the third quarter and kept at least an eight-point lead until the final 2 minutes of the game.

Needing to make a run, South Pemiscot (4-2) started trapping with under 4 minutes left in the game. Tawonn Amerson, who led the Bulldogs with 19 points, scored and drew the fifth foul against Doniphan’s Max Owen, who finished with 18 points. Amerson missed the free throw leaving South Pemiscot down by nine with 2 minutes remaining.

“When he fouled out, it was all about ball security and knocking down free throws,” Cagle said.

After a timeout, the Bulldogs came out in a 2-2-1 trap. The Bulldogs immediately forced a turnover but missed at the other end.

It was the closest the Bulldogs had been since the beginning of the third quarter.

“I thought our pressure got to them late. Doniphan made an adjustment to get their best shooter some free throws and kind of sealed it for them,” McGowan said.

The Bulldogs switched to a full-court, man-to-man press, and Doniphan tried for a long pass on the inbounds.

Laogan Welch leaped for a potential steal near halfcourt, missed, and Doniphan added a free throw.

With 45 seconds left, South Pemiscot’s Mark Jones drove for a three-point play to cut the lead to four points.

Welch immediately fouled Tristian Bryant on the inbounds for his fifth foul. In the double bonus, Bryant made the second. Mark Jones took the inbounds, went coast-to-coast for a quick basket and the Bulldogs called timeout down three points with 36 seconds left.

Facing a man-to-man press, Doniphan called a timeout to prevent a five-second call.

The Dons got the ball to Ethan Jones on their second try, who was immediately fouled and made both free throws.

Quickly upcourt, Amerson drove and dished to Zach Southern under the basket, but the pass went out of bounds.

Ethan Jones added two more free throws, got a steal and a layup, and suddenly Doniphan was back up by nine with 10 seconds left.

“We didn’t do the things to win that ballgame. Our free-throw shooting wasn’t very good, we had too many turnovers, and we gave them too many second-chance opportunities,” McGowan said. “Until we get those three things lined out, we’re going to struggle against really good teams like Doniphan and others. But I think we’re capable.”

Mark Jones had 12 points for South Pemiscot, eight in the fourth quarter, and Jonathan Parry added 11.

Doniphan’s seven-point run midway through the second quarter helped it go into halftime with a three-point lead.

The Dons trailed 21-19 and then scored three straight baskets and a free throw to match the biggest lead of the first half for either team.

Still ahead five and playing for the final shot of the half, the Dons had the ball out of bounds near midcourt.

Amerson jumped the inbounds pass and turned it into an easy dunk to set the halftime score at 28-25.

Doniphan opened the second half with a 13-2 run to take the game’s first double-digit lead.

Ethan Jones made three 3-pointers in the first quarter, while Owen did the same in the third.

South Pemiscot scored the first field goal of the second half but didn’t get another one until Amerson spun in the lane and scored a difficult layup through a foul. His free throw for the three-point play left South Pemiscot down by 12 with 2 1/2 minutes left in the third quarter.

“I thought they came out with a great gameplan the whole time, kind of had us figured out a little bit, stifled us a little bit,” McGowan said. “I thought we finally got going in the third quarter and towards the end.”